What Happens with my Taxes If I Become a Non-Resident in Canada? 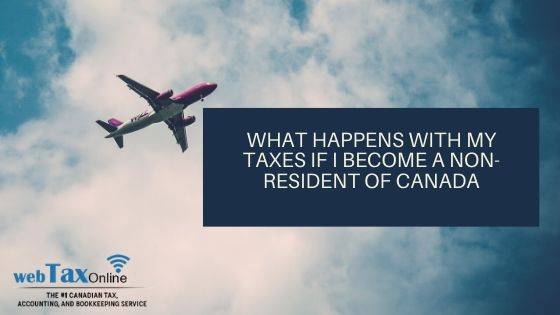 If you’re deciding to move out of Canada and to become a non-resident, there are a few tax implications you have to understand. As a non-resident, your taxes will be quite different than they were previously.

First of all, let’s define a non-resident properly. A non-resident is anyone who has broken all their primary ties and most of their secondary ties in Canada.

All of the above ties must be broken for a person to qualify as a non-resident.

What do I have to do to be considered a non-resident?

You have the option of going to your local accountant and asking them about the NR73 form or filing a departure form tax return if it’s right for you. The benefit of filling out the NR73 form is the clarity it can give you.

Once you fill this form, the CRA can provide you with a notice that determines your residency status with them. However, there is a downfall of filling it out. Sometimes, it may lead to the CRA investigating your file as they generally prefer that you remain a resident since that works in their favor when it comes to paying taxes.

Instead of filing the NR73 form a person can choose to file a departure tax return with the CRA to become a non-resident.

Apart from filing these forms with your accountant, you should also stop contributing to your RRSP unless you expect to have a lot of income in your final Canadian tax return. You should also inform your bank and the administrator of your pension so they can close your accounts and make the necessary changes.

You must get this done before leaving as it can be very difficult to get this done across seas and it may require you to fly back into Canada just to get everything done. You will be required to disclose most of your assets on Form T1161 of your tax return. If you fail to report your assets you can face serious financial penalties for your actions. However, not all of your assets have to be disclosed. Your real estate and RRSPs do not have to be reported.

To summarize, the essential factors to take care of are:

Selling your home after you leave Canada

Another important fact to keep in mind is that you will have to pay a 25% tax on the total gross selling price of your home if you decide to sell after you have already left Canada. This can lead to a lot of financial difficulties for you and that is why it is best to opt for a specific tax election that can reduce the amount to not 25% of the gross selling price, but 25% of the gain on the sale of your home.

Renting out your home

If you decide not to sell your home, but to rent it out instead, then you should file your section 216 tax return to report your rental income earned.

What happens to my tax benefits when I become a non-resident?

As soon as you officially become a non-resident, you will notice the following changes to your taxes and benefits:

·         You will be given 60 days to repay any amounts owed for the home buyers’ plan or lifelong learning plan.

·         Any funds in your tax-free savings account (TFSA) will remain but you won’t be able to accrue addition TFSA contribution room. Trying to contribute as a non-resident will result in a 1% penalty every month.

Get in touch with a non-resident tax accountant as soon as possible to discuss your options and see what paperwork you must get done to stay on the good side of the law.

In a nutshell, you can lose out on a lot of benefits if you decide to become a non-resident of Canada and you don’t follow the proper legal protocol regarding your primary and secondary ties. An accountant can assist you with all the paperwork and give you up to date advice on how you can avoid having to pay extra taxes and fines on your assets while on the path to become a non-resident.